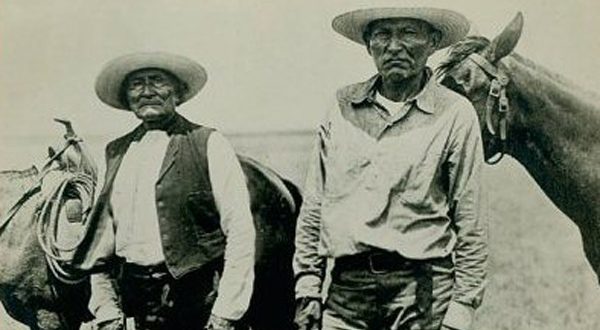 Cochise, Geronimo, and Naiche were warriors. They will remain legends in Apache history. The Apache fought against the Spanish, Mexican, and United States govern­ments for hundreds of years to preserve their way of life in their homeland. One of the most respected leaders in Apache history was Cochise, chief of the Chiricahua band. Cochise was known as an honorable peacemaker who kept his word. As promised, he allowed the mail and overland stage to pass through his territory. In February of 1861, Cochise was accused of a crime committed by someone else. Cochise declared his innocence, but the military authorities refused to listen. This led to war that would last for ten years. Cochise fought so valiantly that he and his Chiricahua band were offered a peace treaty and given their own reservation in exchange for their promise to remain peaceful. When Cochise died in June of 1874, the U.S. government broke the peace treaty and relocated Cochise’s people.

Naiche, Cochise’s son, assumed leadership of the Chir­icahua and continued the resistance against the govern­ment of broken promises. By 1886, only Naiche and Geron­imo with thirty-six men, women, and children remained to fight. Five thousand soldiers, which represented one-fourth of the U.S. military at the time, were unable to capture them. These Apache warriors ultimately agreed to terms of surrender. The Chiricahua were transported by train to join 469 other Apaches being held as prisoners in Florida. The government did not keep its promise of a temporary exile. As months turned into years, Geronimo said, “All we want is to be fed and be released as prisoners and given land and homes that we can call our own.” They remained exiled for twenty-seven years; they were not re­leased until 1913. These Apache were held as prisoners of war longer than any other people in U.S. history.

It was during these years of captivity that Naiche and many others under his leadership finally found true free­dom. Naiche learned of a Great Leader Who also had been betrayed and wounded…the Creator’s Son, Jesus Christ. Naiche chose to put his trust in Jesus Christ. He came to know the peace and power that only comes to those who are adopted into the clan of the Prince of Peace. Naiche dil­igently read and believed the Promises recorded in God’s Word. Each day he walked with the Creator Who always keeps His Word. He learned of the love of Jesus Christ, the Savior of all nations. So sincere was his faith in Jesus Christ that he changed his name to Christian Naiche.

As the Chiricahua leader, Christian Naiche was always concerned about his people, including Geronimo. Chris­tian Naiche was joyful when Geronimo began showing interest in Christianity. Seeking ways to gain additional power, Geronimo attended religious services for a period of time and concluded that Christianity was better than the religion of his forefathers. Yet, he remained just an observer of Christian Naiche’s faith. After twenty-three years as a prisoner, Geronimo’s soul left his aged body and passed into eternity on February 17, 1909.

At Geronimo’s funeral, Christian Naiche spoke to the gathering in his native tongue. He remembered the days of the warpath. He praised Geronimo’s bravery and skill as a war leader and told how he loyally had kept the peace made at the surrender. Sadly, he said that Geronimo had refused to accept Christianity, thus being a failure in the chief thing in life. Christian Naiche closed by asking the people gathered there to learn from this example.

What Did Christian Naiche Gain by Following Jesus?

Naiche received God’s promise of eternal life. He experi­enced forgiveness of sins and harmony with his Creator. He had found healing for the wounds of his spirit. This healing came through Jesus Who was wounded for our sins on the cross (Isaiah 53:5). The Bible tells us that we have all sinned. Even though the cost of sin is death, God’s gift to us is eternal life through Jesus Christ our Lord.

For all have sinned, and come short of the glory of God. –Romans 3:23

For the wages of sin is death; but the gift of God is eternal life through Jesus Christ our Lord. –Romans 6:23

For God so loved the world, that He gave His only begotten Son, that whosoever believeth in Him should not perish, but have everlasting life. For God sent not His Son into the world to condemn the world; but that the world through Him might be saved. He that believeth on Him is not condemned: but he that believeth not is condemned already, because he hath not believed in the name of the only begotten Son of God. –John 3:16-18

What Did Christian Naiche Lose by Following Jesus?

Christian Naiche lost his anger, hatred, and bitterness. Jesus teaches us to forgive and love our enemies. Like Christian Naiche, we need to understand God’s thinking so we can live at peace with problems that we cannot change. Only God can help the wounded to win the bat­tle over anger, bitterness, and revenge. Victory in God’s strength is shown by love and forgiveness.

And be ye kind one to another, tenderhearted, forgiving one another, even as God for Christ’s sake hath forgiven you. –Ephesians 4:32

But I say unto you, Love your enemies, bless them that curse you, do good to them that hate you, and pray for them which despitefully use you, and persecute you….For if ye love them which love you, what reward have ye? –Matthew 5:44-46

Why Would Christian Naiche Accept the God of the Bible?

Christian Naiche could accept Jesus because He is the God of all creation. He is not just the God of one people group. God wants all people to repent and be saved from their sins (II Peter 3:9).

For there is no difference between the Jew and the Greek: for the same Lord over all is rich unto all that call upon Him. For whosoever shall call upon the name of the Lord shall be saved. –Romans 10:12-13

Thou art worthy…for Thou wast slain, and hast redeemed us to God by Thy blood out of every kindred, and tongue, and people, and nation. –Revelation 5:9

What Are Our Choices Today?

If ye continue in my word, then are ye my disciples indeed; And ye shall know the truth, and the truth shall make you free. –John 8:31-32

Believe and trust Him. Receive His gift, paid for by His own death on the cross. Talk to God in prayer. There are no magic words; speak from your heart with Him. You can pray something like this: “Dear Father in Heaven, I know that I am a sinner. I have done many bad things. I do not want my life to be like this. I ask for Your Son, Jesus, to come into my heart and help me change. I ask You to forgive me of my sins and heal my wounded spirit. I ask that I may be saved from the punishment of Hell. I ask that I may learn more about You, my Father in Heav­en, and of Your love for me. I ask that I may follow Your Son, Jesus. Let me learn more of how He gave His life for me and paid for my sins on the cross. I now accept the free gift of salvation that You offer me. In the name of Jesus I pray, Amen.”

Can We Really Live the Christian Life?

Christians need other believers to be their family. God uses the local church (preaching, teaching, & fellowship) to encourage and grow His children.

…and thou shalt be called by a new name, which the mouth of the LORD shall name. –Isaiah 62:2